In 2000, I became the first full-time female professor in Calvin Theological Seminary’s 125-year history. In 2003, a new three-man administration, without warning, removed me from tenure track and gave me a terminal appointment. I was single and fifty-seven. That decision set me reeling. I was stunned and shamed. In the weeks and months that followed, I was sabotaged, sandbagged, slandered, silenced and surveilled, all the while enduring sex discrimination, spiritual abuse, slut-shaming and chicanery of every stripe. The book points to documents every step of the way. In fact, I still find it amazing that the administrators didn't shame and slander and threaten me verbally instead generating hundreds of emails, memos, and letters, leaving a massive paper trail. I carried on with my teaching, trying to pretend to my students that I was as perky as I'd always been, while just trying to keep my head above water. All the while I filed the documents away for safekeeping---documents that show blatant dishonesty and that prompted outside independent mediation that came down so soundly on my side. The book is not just a sad story. It is often upbeat and even funny. And I tell the stories of other professors who have endured similar ordeals in the face of dishonest administrators. There is much more information, including lengthy quotes from the book at Fired at 57 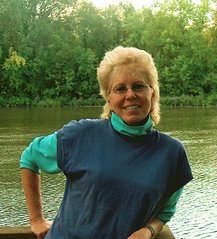 I recently had a very stressful experience.  I pulled my van into a large enclosed loading dock to pick up some heavy boxes only to realize there would be a long wait.  Rhonda was close by also waiting to pick up, so I walked over and asked if I could borrow her cell phone to call my mother and tell her I would be late.  I dialed twice and got a singsong greeting that was not my mother's voice.  Thinking I had dialed the wrong numbers on the tiny phone, I asked Rhonda to try.  All she got was a busy signal.  I knew my mother would be upset and I just had to get through to her, but to no avail.  Trapped by vehicles in front and behind, I became more anxious and agitated with every passing minute.  In the midst of that tension, I woke up.  Strange.  My mother died 37 years ago.  How do I explain such a dream?

I was just asked that.  I probably wouldn't be putting this in print if it were falling apart!  John is fantastic.  Indeed, I never could have imagined marriage could be so incredibly good.  I kid people that he had 2 previous (and wonderful) wives who whipped him into shape before I got him.

So, is this case taking a toll on the marriage?  Apart from the usual spats (See post onNagging on River-Rat Reflections), we have had only one fight over this.  Well, not really a fight, but an ongoing difference of opinion and reaction.

He wants to tell 'them' off.  I won't let him.  Now, he's got a mind of his own.  So, if he tells someone off, it will be without my knowledge or consent.

On one occasion this almost happened as we were heading to the parking lot (after a funeral, no less!)  He started out in another direction, muttering under his breath, I'm going to talk to _______.  I said, in horror, "Donít you dare!"  I thought I was going to have to wrestle him to the ground in the parking lot of the church, but fortunately he came to his senses.

This case is documented.  It's not a he said/she said case.  Nothing will be gained, dear husband John, if you tell 'them' off.
Additional Comments
In addition to comments and responses above, and reader comments linked below, there have been many more responses to this web log.  I've added a Side Posthere containing a selection of recent responses sent directly to me. Additionally, anyone interested in my brief commentary about the reactions and comments I've gotten can also visit my "River Rat Reflections" blog.
Posted by Ruth Tucker | Permalink | Comments (13) | TrackBack (0)
Posted by Ruth A. Tucker at 9:53 AM No comments:

Summary of My CTS Story

I began teaching at Calvin Theological Seminary in 2000--the first full-time woman professor in the school's 125-year history. In 2003, less than 3 months after Cornelius Plantinga, Jr. was installed as the new president, I was, without warning, removed from tenure track and given a terminal appointment. I have repeatedly asked that all the evidence be opened only to be blocked by a dishonest cover-up. When independent mediators were retained by the seminary board in 2005, they called for "retroactive pay to 2003," among other things. That report was buried. I finished my second terminal appointment on August 31, 2006, and shortly thereafter published my story at www.ruthtucker.net.